Chapter 1 : An Idea is Born

The philosophical argument of my idea, and now by extension hypothesis, regarding how and why our universe came into being is based on one key assumption. That is, fractal geometry is the underlying cosmological principle; as opposed to the spatial distribution of matter in the universe being both homogenous and isotropic.

A self-similar pattern, with respect to fractal geometry, is an object that is exactly or approximately similar. That is, the whole has the same shape as one or more of the parts that make up the whole. Scale invariance is an exact form of self-similarity where at any magnification there is a smaller piece of the object that is similar to the whole.

A Koch curve has an infinitely repeating self-similarity when it is magnified.

The hypernova of a massive star that gives birth to a black hole while releasing a pair of gamma-ray bursts is the second largest explosion in the universe. Second largest because the Big Bang event that gave birth to our universe was the largest.

Marrying the idea of self-similarity of fractal geometry with the physical process of a hypernova gave rise to my idea. Was the Big Bang in actual fact a kind of supernova following the same physical dynamics as an exploding star? Imagine a star like object, outside our existence, so massive that it contains all the matter in the universe but star like nonetheless.

At the quantum scale the pair annihilation of an electron and positron produces a pair of gamma-ray photons each travelling in polar opposite directions. At the stellar scale the hypernova of a massive star produces a pair of gamma-ray bursts each travelling in polar opposite directions from the other. The Big Bang Hypernova Hypothesis imagines a hypernova explosion at a cosmological scale giving birth to our universe.

As a guide, the unexplained presence of the Bootes supervoid whose spherical shape has a diameter of 330 million light years across is such a star like object, I would conjecture. Otherwise, if not then why is it so spherical? And in a universe that is so homogenous and isotropic why does this supervoid, this mass of nothingness, that occupies 0.27% the volume of the observable universe exist? 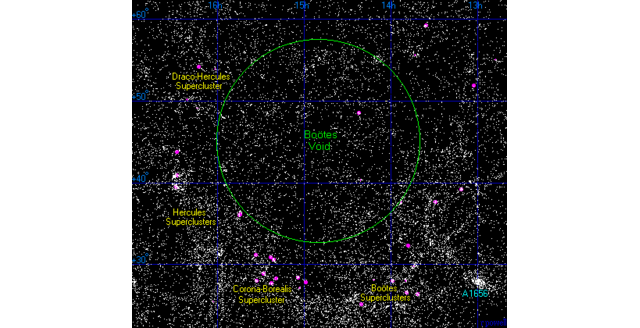 The Bootes Supervoid is an enormous spherical region of space, about 330-million light years in diameter, containing very few galaxies.

In order to understand my idea I first need to describe the physical process of a hypernova, the second largest explosion in the universe aside that from the Big Bang event.

Every star begins its life as a huge cloud of dust, primarily composed of hydrogen, drawn together by the force of gravity. The pressure and temperature at the heart of the protostar, coming from its gravitational weight and friction, becomes so l arge that the atoms begin to fuse together starting the nuclear fusion process. At this point, a star is born as the nuclear fusion process at its core comes to life and it shines for the first time.

Hydrogen fuses to helium; helium fuses to beryllium and carbon; carbon to oxygen and so on to form all the other heavier elements. In other words, all the atoms that make up your body and the world around us were formed in the heart of a star. We are quite literally star stuff.

There are two primary forces working directly against one another that determine the shape and size of any star. The first inward force comes from the gravitational mass of the star where the direction of that force is in towards the core. This is what gives rise to the incredible temperatures and pressures at the core where the atoms are fused together because of this gravitational force. The energy released from the fusion process gives rise to the second outward force. This outward force comes from the energy released from the fusion of atoms at the core. This outward force in turn counter balances the inward gravitational force; the equilibrium of which determines the shape and luminosity of the star over the coarse of its lifetime.

The hydrostatic equilibrium between the inward force of gravity, coming from the star’s mass, and the outward fusion force at the core. As hydrogen is converted into helium it comes to replace the hydrogen at the core.

For the vast majority of a star’s life the primary fusion process is of hydrogen into helium. But every star has a finite amount of hydrogen and eventually this will run out as the star comes to the end of its life. So when all the hydrogen fuel in the sun has been converted to helium then the fusion of helium becomes the dominant process. This change in the fusion’s fuel source creates a new distribution between the two aforementioned competing forces.

How a given star dies or goes supernova is dependant on how the two competing forces are redistributed when its hydrogen fuel source is depleted. In the case of our own sun, around 4-5 billon years from now, this redistribution in the hydrostatic equilibrium will cause our sun to swell up into becoming a red giant.

This expansion of our sun into a red giant will engulf the planets of Mercury and Venus, while burning Earth to a cinder. In turn, huge clouds of plasma and gas are ejected from our dying sun leading to the formation of a planetary nebula.

This movie shows the time-evolution of the shock wave that is created when the core of a rapidly rotating, strongly magnetised massive star collapses to a proto-neutron star. The dynamics are dominated by the ultra-strong magnetic field ( \( ~10^{16}G \) ) that is build up during and shortly after the collapse. A prompt jet-like explosion is foiled by a spiralling MHD kink instability that disrupts the jet. Subsequently magnetic fields continue to dominate as funnels of highly magnetised, launched from the proto-neutron star, advance the shock front outwards in a highly asymmetric fashion. The different colours correspond to gas of different temperature (the variable shown is "specific entropy", which is closely related to temperature). Blue corresponds to the coldest gas, green is hotter gas, and yellow and red are the hottest gas. The movie depicts a 2D simulation on the left, and the corresponding meridional slice from a 3D simulation on the right. [1]

The force from this colossal inward implosion at the core fuses the remaining material together. Depending upon the size of the star, this inward implosion forces any space between particles out and gives birth to white dwarves, neutron stars and even black holes.

A white dwarf, composed mostly of electron-degenerate material, is so dense that a single teaspoon would weigh a tonne. Even denser still, a neutron star, where the core has collapsed beyond the point of the atom and into its nucleus. Electrons fuse with protons becoming neutrons, hence the name, a neutron star. A teaspoon from a neutron star would weigh around a billon tonnes.


A Black Hole is a Fundamental Particle